December 22, 2013
Seven years ago,  Sierra Leone's Social Security and Insurance Trust enjoyed a Le141 Billion surplus although scheme officials were still trying to sell membership to the workforce and employers. This week, Audit Service Sierra Leone, the agency in charge of the nation's purse, raised a red flag.

"The management of the national pension trust, NASSIT [National Social Security and Insurance Trust], is of concern to me and this is reflected by its inclusion in a separate chapter," wrote Auditor General Lara Taylor-Pearce in the annual report of the Accounts of Sierra Leone for year ended Dec. 31, 2012. "The findings on governance, control and asset valuation in that agency should be a major concern for parliamentarians and all citizens," Taylor-Pearce urged the nation in the report.

This puts NASSIT and its director general, Sam Bangura Jr., scion of the late Sam Bangura, governor of the Bank of Sierra Leone (1970-1979), on the spot. To mark the 10th anniversary of the pension fund last year, Bangura Jr. said that the agency established in May 2002  had gained quite an enviable position. “We must be proud of this and walk tall in the streets of Freetown, Bo, and Kenema and all over the country,” he told the nation as he faced the press.

And the facts in the eye-opening 2012 Accounts of Sierra Leone bear Bangura out.

However, the auditor report notes that although more private sector members were now registered under the business-friendly Koroma administration, the public sector contributes more than the private sector, adding that one of the reasons for this inverse relationship is lower contribution compliance by the private sector.

Among the audit service's recommendations were that NASSIT should consider building a relationship with employers rather than relying on the law to enforce contribution collection. The report also urged a closer relationship with the National Revenue Authority and the Office of Administrator and Registrar General to create a one-stop service counter and to more easily keep track of employers and employees of the scheme.

The auditors also note the systems and procedures by which NASSIT collects contributions, pays benefits and the manner in which Trust funds have been invested needs to be considered as a matter of urgency. "Deficiency in these systems would seriously affect the capability of the Trust in achieving its statutory mandate," the report noted.

During the period 2008 to 2012, it took NASSIT an average of 58 days to process and deliver payments to retirees.

"The objective to promptly process and pay old age benefits within NASSIT’s target of 15 days was not met in 2012, the auditors stated. “NASSIT has not determined the actual number of days it takes from the point when a valid and complete application is made, to the point when the beneficiary’s check is handed over.”

In order to determine the time taken to process and pay retirement benefits, government auditors  surveyed over 500 randomly selected pensioner files for the years 2008 to 2012. Analysts show it took an average of fifty days for NASSIT to process and pay retirement benefits in the Western Region where the headquarters is located compared to that of the Northern, Southern and Eastern regions, which took 60, 63 and 67 days respectively. The longest waiting time occurred in the Eastern Region with an average of 67 days.

“The payment of retirement benefits (gratuities, grants and pensions) is important to beneficiaries. It is the right of every registered member of the scheme who has fulfilled all the conditions to get accurate and prompt payment of his benefits whenever a contingency occurs,” the report advised the public.


NASSIT offices register individuals and establishments within the four regions, receive applications for retirement benefits and effect payments of benefits upon receipt of the processed checks from head office.  According to audit service interviews, applications made in the provincial regional offices were forwarded to headquarters in the capital Freetown for benefits computation once every week.

“It takes headquarters two weeks to process private sector benefit applications and three weeks for public sector benefits before returning them to the originating regions. It's recommended that the Trust should improve on its delivery service and ensure that pensioners promptly receive their payments.”

Dated checks currently amounting to Le 815,292,000 were another red flag. These arose as a result of non collection of retirement benefits and 79  gratuity payments, the report explained.

NASSIT management noted the concern of the auditors.

"When cheques are forwarded to payment points, customers are contacted by the Customer Service Department on the availability of their cheques for collection using the cell phone numbers and address submitted. Customers are expected to report to our payment points for physical verification, biometric registration and payment of gratuity. Most of the stale cheques are those who cannot be contacted on known address with us. The trust has conducted several public education and public notice on the uptake of gratuity and pension,” Nassit executives said.

The report also noted  performance took a dip in 2009 due to an increase in general administration expenses and benefit payments while there was a fall in investment income.

Procurement procedures were not followed and supporting documents not provided for purchase of motor vehicles amounting to Le958,572,817, the report said, recommending that the Trust ensure full compliance with procurement rules and regulations.  “The Trust did not follow the appropriate procurement method when awarding contracts for its Affordable Housing Projects. National Competitive Bidding was used instead of  International Competitive Bidding."

Loan agreements, totaling Le7,020,717,000 were not made available for audit inspection, the report noted.
Government of Sierra Leone (GoSL) auditors found the amount of loans that have been given by the Trust to subsidiaries and associates was still outstanding as at the 2010 financial year.

There was also evidence of a US$1,372,551 (equivalent to Le5,421,579,886) repayment of a loan to Eco Bank Ghana Ltd seen by the audit team. However, no evidence of a loan agreement was provided for audit inspection.

A loan plus interest amounting to Le 11,294,095,000 was made to Sierra Block Concrete Ltd. a subsidiary of the Trust. The loan was given in 2004, but no payment has been made. The subsidiary did not have an audited financial statement and appears to be unprofitable, the report said. 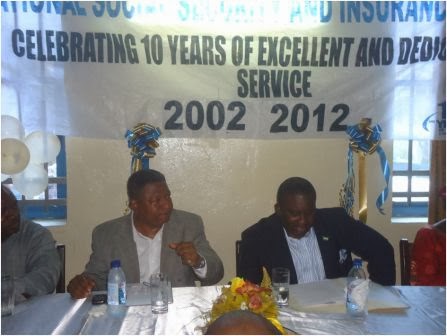 Some 32 percent  of trust's funds, valued at cost, are tied up in investments and loans to subsidiaries and associated companies which are largely commercial in nature the report notes. However, some of these appear to have lost value significantly.

In May, Bangura urged government to help in moving people who he said had encroached on land and other facilities owned by NASSIT. Bangura made the call during the visit of Minister of Labor and Social Security, Mathew Timbo, and  journalists to NaSSIT project sites and properties across the country.

Over the years, the Trust has undertaken large amounts of investments in various sectors of the economy, particularly socially targeted investment. Investments increased by 85 percent in 2009 and 17 percent  in 2010. Despite this increase the Trust has not received much dividend income.

As at 2007, the Trust had 74 percent of its investment in GoSL [government of Sierra Leone] securities and term deposits with other financial institutions in Sierra Leone. This concentration has been reducing over the years, such that as of 2010, the Trust only had 39 percent  of its portfolio

The second highest concentration of investment is in equities, the report said. "These comprise investments in subsidiaries and associates. As at 2007 the percentage was 12.6 percent, but the concentration in this class has fluctuated over the years.  It can be seen that over 93 percent of the Trust investment income is derived from term deposits and treasury bills. Even though the Trust has been reducing its concentration in these, it remains heavily reliant on this class of securities which exposes it to any fall in interest rates or other financial crisis."

In conclusion, the government auditors noted:

"We do appreciate that there is social capital associated with some of these investments but it seems to us that  investments need to substantively comply with  the [law]. Failure to address fundamental weaknesses in its investment decisions, contributions collection and the payment of benefits lead us to conclude that that Board of Trustees is failing in its responsibility to provide control and supervision as required by the NASSIT Act 2001.

“We are not saying or implying that in undertaking such investments and loans the Board is acting ultra vires the Trust’s enabling legislation. That would be a matter for legal opinion and we have not requested such an opinion from legal counsel. However, what is apparent is that some of these investments and associated loans (despite having ostensibly sound business plans to support them initially) are now of doubtful value, seriously impaired and do not meet the liquidity test."

The auditors remarked that the ultimate objective of social security systems is to honor benefits when they are due, requiring financial sustainability. They also warned it’s imperative that stakeholders of the scheme get independent assurance about the financial viability of NASSIT in the light of investment decisions undertaken.

"The long term viability of any social security scheme depends on the success of its investment portfolio," the auditors said..